Among the Croats in Sydney, Croatian Franciscans have been living and working since mid-1957 as pastors of Croatian Catholics. In their work, they went through the same path that most Croatian post-war immigrants went through: together with Croatian believers, they were first guests of Australian Catholic churches throughout the city for more than a decade, and then bought an old church in Summer Hill. it was erected by a pastoral center. Finally, in 1985, they branched out into two new Croatian Catholic centers. One in Blacktown and the other in St. Louis. Johns Park. 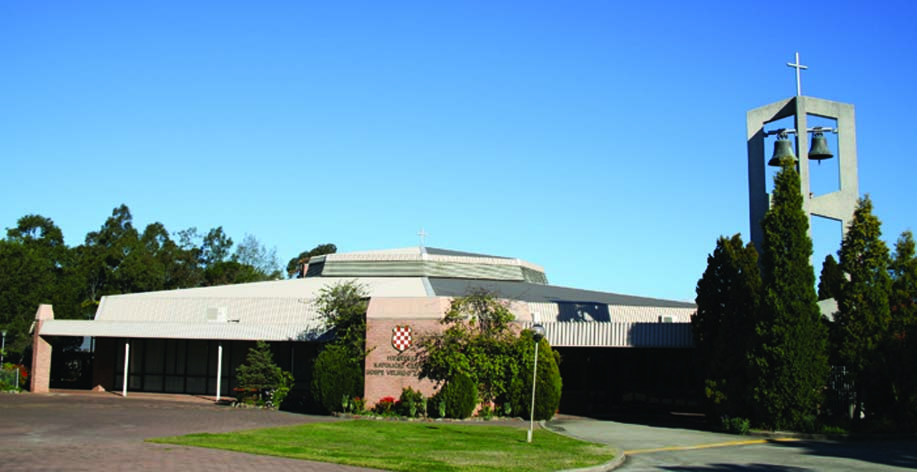 After 1970, more and more Croats moved west and southwest to Sydney. In that part of the city, Fr. Rok Romac and Fr. Lambert Ivančić also established gathering places for Croatian Catholics in Mt. Druitt and Blacktown. In these settlements Masses were held twice a month. In 1978, the Summerhill Franciscans left these two religious gathering places and gathered the faithful in Doonside, a settlement lying between Blacktown and Mt. Druitta, and there they celebrate Mass every Sunday. Prior to 1985, more believers gathered in Doonside than in any other gathering place outside Summer Hill. The pastors therefore decided to look for a suitable construction site in that part of the city to erect a church and a new pastoral center.1

In 1980, the possibility of buying land to build a pastoral center appeared in several places in that part of Sydney. One was in the area of ​​St. John’s Park in Fairfield, while the other was in Blacktown. As the Summerhill pastors at the time believed that the Croatian community was only able to build a new pastoral center, they decided to buy land in the Blacktown area, in the Eastern Creek area, along the Great Western Highway. The land was leased on April 3, and paid off on April 15, 1981. As early as June 12, 1981, a church committee was formed for the construction of a new pastoral center with President Ivica Radačić, Deputy Jerko Čurković and Treasurer Ivan Biličić. Other board members were: Maks Bukovac, Nevenko Krncevic, Joso Prusac, Ivo Kamber, Ivan Bajac, Slavko Hrzenjak, Drago Klinsic and Mate Dzaja. The land was purchased for $ 196,500, and the conceptual plan foresaw that it should be built there: a spacious church, a school building, a hall for religious gatherings, an apartment for a priest, a nursing home and other ancillary facilities and a parking lot. The Summerhill Franciscans announced this to the Croatian faithful on May 3, 1981, in a special leaflet, and also decided to inform the faithful about the progress of construction in a monthly bulletin.

The city government first delayed granting permission to build a new pastoral center because the city council had not yet decided whether the land would be part of an industrial zone or a free construction zone. When the mayor of Blacktown gave hope that the land would be in a residential zone on July 16, 1981, he organized a Croatian Catholic center in Summer Hill to collect signatures in support of such a solution and handed over a petition with more than 1,500 signatures to Mayor John Aquillina. Yet the final response was negative, which stopped Sydney pastors from realizing their intention, but did not lead them to give it up either. Josip Švenda was entrusted with the task of finding the construction site and building a new pastoral center. In the meantime, the governing council of the Croatian Franciscan Province in Zagreb elected him head of the pastoral center and Franciscan head of Summer Hill. The land in Eastern Creek was sold in early 1985 for $ 525,000.

The new land was found by Sydney pastors in early 1984 in Blacktown, and on March 23, 1984, they paid off its $ 300,000 price tag. After considering the offers of the construction contractors, the one given by the construction company McNamara was accepted, and on January 24, 1985, a contract was signed with it for the construction of a new pastoral center in Blacktown. The building complex included a church and an apartment for priests and a parking lot, and the cost was $ 1,478,690. The pastors informed the faithful about this in a special letter, in February 1985, after the work on the Candlestick began on February 2 of that year. The pastors also decided, at the suggestion of Fr. Toni Mutnik, that the new church would be dedicated to Our Lady of the Great Croatian Covenant, so they published the words of Cardinal Kuharić, who wished it to be “the votive shrine of all Croats living in Australia, the new Marija Bistrica “. There was a belief among the Summerhill Franciscans at the time that the new pastoral center in Blacktown would “become a central place for all Croatian Catholics in Sydney”.

In the same complex with the church, and in connection with the sanctuary of the church, simple and modest rooms of the pastoral office and the priest’s apartment were erected. At the entrance to the church land, on the left side of the entrance to the church, an independent building emerged in 1991, a large building of the pastoral and school center. Access to the building is from the side of the church: stairs lead to the open vaulted entrance and then to the lobby, which leads to three school classes, a library, office rooms and a large hall with a kitchen and bathrooms. The hall was decorated by the academic painter Ivan Rogina with numerous paintings with motifs of cities, significant buildings, and the natural beauties of Croatia. In addition to the large hall, this building complex also has two smaller halls on the high ground floor. The new building was blessed on November 24, 1991 by the Bishop of Blacktown, Bede Heather, and opened at a special ceremony on September 12, 1993, by Cardinal Franjo Kuharić. To the right of the paved entrance to the center complex is a large parking lot for 288 cars, and to the paved parking lot continues a park that reaches far behind the church buildings. In this park, the church committee organizes picnics, taking care not only of the culinary offer but also of the performances of singers, musicians and folklore groups and dancers.

Half an hour before each Mass

HKC Blacktown (Our Lady of the Great Croatian Covenant)