It is estimated that somewhere between five to seven thousand Croatian immigrants and their descendants presently reside in Canberra and its surroundings, including Queanbeyan. The immigration of Croatians to the Australian capital was particularly intensive in the 1960s and 1970s. As is their custom, Croatians are typically known to be a people who uphold their faith and its values, predominantly as Catholics. In the seventies, Church authorities in Croatia responsible for the pastoral care of emigrants, together with the Archdiocese of Canberra and Goulburn, decided to give the pastoral care of Croatian in Canberra a permanent form.

This marked the beginning of organised work for Croatian priests and sisters amongst this community and in their language, uniting Catholic believers of Croatian heritage in Canberra and Queanbeyan (NSW) and forming the Croatian Catholic Centre Canberra – Queanbeyan of today. 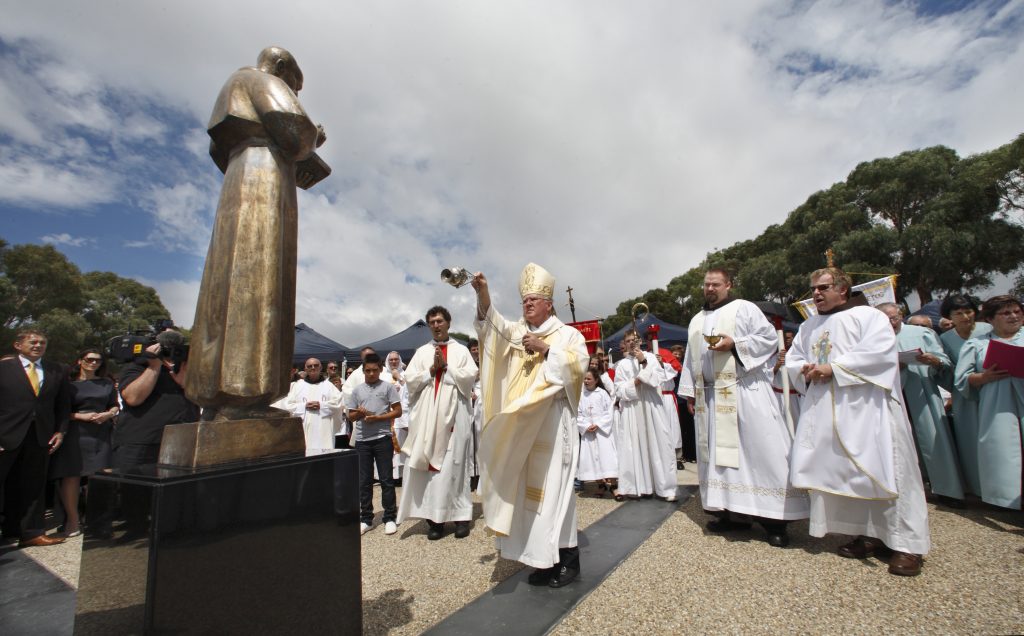 ESTABLISHMENT OF THE CROATIAN CATHOLIC CENTER IN CANBERRA

THE ARRIVAL OF PRIESTS

Post-World War II, the number of Croatian migrants in Australia steadily increased. Known for the centrality of faith to their identities, these migrants did not wish to remain without their own church or priests. Thus, it was not long until Croatian priests joined them in their new country.

Rev. IVAN MIHALIĆ came to Australia from Canada in 1953. From his residence at the Franciscan monastery in Sydney, he occasionally visited Croatians in Wollongong, Mildura, Bonegilla, Wodonga, Melbourne, Adelaide, Berry and Broken Hill, and Canberra and Queanbeyan.

Fr. ROK ROMAC (alias Oswald Toth) came to Australia from Bolivia in 1955. Initially, he tended to Croatians in South Australia (Adelaide, Perth, Mildura, Broken Hill), and in 1957 moved permanently to Sydney. From there, he more or less celebrated mass with the Croatians of Canberra and Queanbeyan at least on a monthly basis.

Fr. LAMBERT IVANČIĆ began visiting Canberra with Fr. Rok Romac from 1966, and eventually assumed responsibility for the pastoral care of Croatians in this area. Fr. Lambert initially visited monthly, later increasing his visits to fortnightly, and resided with the families of Stjepan Vuk and Marko Babić when the need arose.

Fr. EUZEBIJE PETAR MAK arrived from Croatia in 1968, initially residing and working in Sydney. When he assumed responsibility for the spiritual needs of Croatians in Canberra, Wollongong and Queanbeyan, he would typically reside for a week in both Canberra and Wollongong. Following the death of Fr. Rok Romac in April 1970, Fr. Euzebije returned to Sydney.

Fr. MATO BONIĆ travelled to Canberra in 1970 to briefly visit his family there. However, at the request of Croatian priests from Sydney, he extended his stay until Christmas of that year. Quickly into his extended stay, the Croatian Migration Council in Zagreb learned of his presence in the Canberran Croatian community, and with the agreement of the Franciscan Province of Bosnia (of which he was a member), Fr. Mato was invited to become a pastor in Australia on the behalf of Croatia’s bishops. Thus, on 13 March 2971, by decree of the Croatian Migration Council of the Episcopal conference, Fr. Mato was named a pastor. Being he was already in Canberra at the time, it was thought best for him to remain where he was. As a result, this date signifies the establishment of organised and permanent pastoral care to Croatian Catholics in Australia’s capital city, and therefore the founding date of the Croatian Catholic Centre for Canberra and Queanbeyan.

In his early years and in the spirit of a true missionary, Fr. Mato sought to gather the community, find space for liturgical celebrations, and obtain a permanent place of residence. Such were his efforts that with time, the need for another priest arose, and in 1977 Fr. DRAGO PRGOMET arrived, becoming Fr. Mato’s “right hand”. As the home of the until then Croatian Catholic Centre in the suburb of O’Connor did not meet the growing needs of the two priests, a house was purchased and renovated in the suburb of Braddon at 23 Doonkuna St. Many members of the Croatian community assisted this project financially, with some working voluntarily to complete the necessary extensions.

During Christmas of 1978, Fr. Drago left for Brisbane at the request of Croatians from there who were without a Croatian priest. Again, through the efforts of the Croatian Migration Council in Zagreb, his role there became permanent, however this left Fr. Mato alone in Canberra again. Faced with both illness and increasing pastoral demands, Fr. Mato again requested assistance from his superiors in Sarajevo, and on 26 January 1980, Fr. TVRTKO GUJIĆ arrived from Bosnia and Herzegovina. With the retirement of Fr. Mate Bonić in 1985, Fr. Tvrtko officially assumed leadership of the Centre, and during his tenure was assisted by Fr. Mato Bonić and Fr. MATO MARTIĆ.

In 1991, Fr. Nikica Zlatunić took over the leadership of the Croatian Catholic Centre in Brisbane and Fr. Drago returned to Canberra, where remained until 1993, when he was moved to the Croatian Catholic Centre in Wollongong to replace Fr. Stipe Šešelja who, for health reasons, could no longer continue his duties there. On 29 May, 1995, Fr. Mato Bonić passed away in Canberra. In 1998, Fr. VJEKO TOMIĆ arrived from Bosnia and Herzegovina, but by 2000 had already returned to his homeland.

On November 23, 2001, Fr. ANTO ŠIMUNOVIĆ came to Canberra and in 2002 assumed leadership of the Centre, prompting Fr. Tvrtko’s return to Bosnia and Herzegovina on July 23, 2002. After the arrival of Fr. Ivo Tadić to the Croatian Catholic Centre in Wollongong, on 19 August 2002 Fr. Drago returned once again to Canberra, staying with Fr. Ante Šimunović. At the end of August 2009, Fr. Anto returned to Bosnia and Herzegovina upon the arrival of Fr. MIROSLAV MANDIĆ, who would lead the Centre for the next three years, until in 2012, Fr. MIROSLAV JELIĆ replaced him in that office. As Fr. Miroslav had to return to his homeland, on 18 February 2012 he was replaced once again by Fr. ANTO ŠIMUNOVIĆ, who remains the current caretaker of the Croatian Catholic Centre in Canberra and Queanbeyan.

THE ARRIVAL OF NUNS

The Sisters of the Adorers of the Blood of Christ (Klanjateljice Krvi Kristove) have worked alongside Croatian priests within the community, with the first of their order arriving in Australia in 1963 and settling in the Croatian Catholic centre in Melbourne. They were: Sr. KLARA JAKOVLJEVIĆ, Sr. JOSIPA SANTRO, Sr. IRMA BULLESBACH and Sr. JUDITA BALJKAS. In 1966, they were joined by Sr. JELISAVA TOMIĆ, Sr. MARIJA ČOSIĆ, Sr. EMANUELA TOTIĆ and Sr. CECILIJA GLIBO. By 1968, these sisters had opened their own house in Melbourne.

The sisters would occasionally travel from Melbourne to visit Croatian families in Canberra. These families were so delighted by their visits that it prompted calls for them to reside in the community permanently, so much so that the nuns began to consider it themselves. With the arrival of Fr. Mate Bonić, this idea received further impetus to come to fruition, who penned the following letter to the Head of the sisters in Zagreb, dated 20 April 1971:

“Our faithful here have raised the question before me of the permanent presence of these nuns in our community. Currently, there is an acute interest in the sisters. For this reason, I am asking you to approve the arrival of several of your sisters from Melbourne, as well as a few from the homeland.”

In August 1973, thanks to the financial support of Archbishop Cahill, a number of the sisters moved into their own house. From this house at 6 Templeton St in the suburb of Cook, the sisters undertook numerous activities both amongst Croatian immigrants and in the local church. They strove to do good to all people in any way they could, and were particularly engaged with child care centre activities, established a prayer group of the Precious Blood of Christ, conducted a church choir, provided music instruction, as well as counselling.

In addition, the younger of the sisters engaged in a variety of studies, obtaining degrees in theology, music, and pedagogy. Though these were the the personal achievements of each individual sister who derived from them a significant source of income, these academic achievements also enriched the quality of their pastoral work in the Croatian community in this part of Australia.

By teaching Croatian language and religious studies to the children of migrants via the Croatian Ethnic School, and also by teaching in various primary schools, visiting the sick and poor, and through their social work, the sisters became an indispensable part of the Croatian community in Canberra.

Eventually, the sisters sold their house in Cook and to move to a ‘Croatian settlement’ that had formed in the suburb of Stirling. Together with the community that had settled there, they had shared in the hope that a church planned for there would be built. Four years after their move, after all those hopes had been dashed, the sisters found themselves in the unfortunate situation of having to look for new accommodation for themselves to be able to continue their pastoral and charitable work in the community.

The impossibility of serving three Croatian centres in Australia due to a shortage of nuns soon followed, and the sisters were forced to leave one centre, which unfortunately for the community there, was to be Canberra. And so, in early 2002, the sisters left Canberra, their departure leaving a visible void in the community.

This has been the logo of the Croatian Catholic Centre of Canberra & Queanbeyan for almost two decades. It is designed to symbolically express the feelings of Croatian in the second half of the 20th century. Croatian immigrants are represented by a human heart, while their native country, Croatia, is recognised by its well-known coat of arms consisting of 25 red and white fields resembling a checkerboard. The difficulty of leaving their old country and settling in theie new one is expressed by a cross rising from the heart and coat of arms. The letter M is a sign of the Virgin Mary, in whose intercession the believer trusts as he carries his cross, and to whom Croatian Catholics are extremely devoted. These symbols are then surrounded by the frame of a church’s doors.

The Croatian people were baptised 1300 years ago. From that point on, their national identity has been strongly linked to their membership of the Catholic Church.

Our logo made its first appearance in the Croatian Catholic newspaper ‘Southern Cross’ (Južni križ), first established by Canberran priest Fr. Tvrtko Gujić in December 1980. In 1985, it became the official logo of the Croatian Catholic Centre in Canberra and Queanbeyan. The current form of the logo first appeared in the 24th issue of the Southern Cross in November 1992.

The first Saturday of the month