The first regular pastor of Croatian Catholics in Geelong was Don Josip Kasić, a priest of the Vrhbosna and later the Melbourne Archdiocese, who came to Australia by boat with the first post-war generations of Croatian immigrants. Settling in Melbourne, he visited the Croat community in Geelong every Sunday, where he celebrated Mass with the people for 12 years (1961-1973) at 7 am. 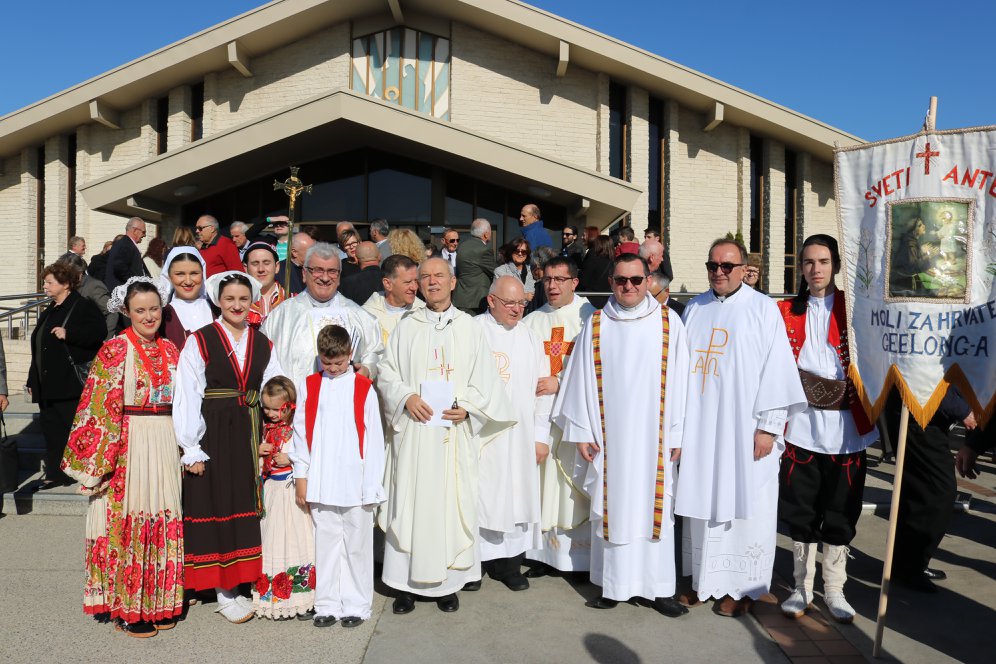 Don Stjepan Gnječ, a priest of the Archdiocese of Split, came and settled in Geelong, where on July 8, 1973, at the age of 36, he founded a separate Croatian Catholic community Geelong – Ballarat – Mildura with church councilors. Don Stjepan served there for a full 40 years, until his death in 2013, and he was remembered in the community for his diligent work with children, teaching religious education, the Croatian language, preparing plays and playing various musical instruments.

Don Luka and a new beginning

In 2013, Don Luka Pranjić, a priest of the Vrhbosna Archdiocese, came to Geelong, who soon, on November 12, 2014, officially registered the Croatian Catholic Center Sv. Ante. On that day, he began and in a very short period of time built the house for the priest and the chapel, which was blessed on November 12, 2016 by the Archbishop of Melbourne, Msgr. Denis Hart. Don Luka then celebrated his silver priestly jubilee, most of which – as much as 23 years – was dedicated to the pastoral care of Croatian Catholics in Australia.

After serving in Melbourne, he went to Adelaide, then to Geelong, and from 21 May 2017 he was entrusted with HKC Clifton Hill in Melbourne, where he is assisted as a pastoral assistant by an Australian priest of Croatian descent, Don Velimir Maglica.

In the settlement of Bell Park, where every other house seems to be home to Croatian immigrants, a new chapel has been built, patiently awaiting the beatification of the servant of God Petar Barbarić in order to submit to his protection. For now, until the future Blessed joins him, the chapel is protected by St. Anthony of Padua, as well as the entire Croatian Catholic Center. In this beautiful building, about 30 people gather every day to celebrate Holy Mass in the Croatian language. The chapel is equipped according to church regulations, but it is also very modern and adapted to the circumstances, so that during the celebration, Croatian church songs and other parts of the Mass were written bilingually on a large TV screen. The warmth and simplicity of the chapel increasingly attracts young parents to bring their children to be baptized right there, and almost regularly the sacrament is administered in two languages, because young people still understand English better and their parents Croatian.

Sunday Holy Mass has been celebrated in the Australian parish for more than 55 years, and the new parish church of the Holy Family has also been largely helped to build by Croat immigrants, along with Italians, Slovenes and others. Despite this, today they still pay rent so that they can celebrate Mass on Sundays. On that day, the church is full of Croatian believers who come faithfully to celebrate the Eucharist from 11 am. Very skilfully, together with her sisters, the church choir is conducted by the young and talented Ana Erceg, a native of Sarajevo, which – as she points out – she is very happy to visit.

In order for the faithful to hear liturgical readings from the mouths of some of the younger members of the community, they are diligently searched and arranged by the church councilor and young mother Mrs. Anđela Čičak, sister of the legendary player of Split Hajduk and Australian national team Josip Skoka, who is also a member of the Croatian community. his two sons regular ministers.

Don Luka Pranjić, a priest of the Vrhbosna Archdiocese, who came to Geelong in 2013, is a talented musician with several published songs, both personal and with the band Oluja, which he also founded upon his arrival in Australia. His cheerful spirit, which is witnessed by the faithful entrusted to him, most likely finds its source in the music and innate meticulousness that he carries from the family house in Bijelo Brdo in Posavina.

Source Sunday, the portal of the Catholic Weekly

On Saturday, November 12, 2016, the blessing of the newly built chapel and house for the priest Don Luka Pranjić was solemnly celebrated at the Croatian Catholic Center of St. Anthony of Padua in Geelong, Australia. The Archbishop of Melbourne, Msgr. Denis Hart, Auxiliary Bishop of Banja Luka Msgr. Marko Semren, head of the Geelong mission don Luka Pranjić, director of the Foreign Pastoral Office Dr. Tomislav Markić, and 15 priests from other Croatian missions in Australia.

In the chapel of the center, a short prayer and blessing was held, and then all those gathered headed to the church of St. A family in which the Croatian Catholic community of Geelong celebrates Masses in Croatian on Sundays. The solemn Eucharistic celebration was presided over by Msgr. Hart with the concelebration of Bishop Semren and the priests already mentioned. Church of St. The family was completely filled with believers who glorified the Lord with rapturous song and prayer. Liturgical singing was animated by the Choir of St. Ante and HKUD Lado.

The Consul General of the Republic of Croatia in Melbourne, Mr. Dubravko Belavic, also took part in the celebration.

At the end of the Holy Mass, several greeting and thanksgiving speeches were given. First, Don Luka Pranjić addressed the gathered, thanking all the donors and those who participated in the construction of the mentioned facilities. He also thanked Archbishop Hart for responding to this celebration and thus showed the care of the local church for the Croat believers living in his Archdiocese. Members of the pastoral council Paul Saric and Ivan Čičak also addressed the gathered. Bishop Semren also addressed the faithful briefly, conveying the greetings of the bishops of the episcopal conferences of the Republic of Croatia and Bosnia and Herzegovina. In their speech, the members of the pastoral council especially remembered the first pastors in this mission. They especially thanked the Victorian-Croatian Cultural and Charitable Center, and the Croatian Geelong Clubs, which donated the land and the hall to the Croatian Catholic Community.

After the Holy Mass, the celebration continued at the table in the Club of the Croatian Community Geelong.

BLESSING OF THE CHAPEL AND PARISH HOUSE IN HKC SV.ANTE IN GEELONG

By communion in preserving faith and love for God

On Saturday, November 12, 2016 at HKC Sv. Ante in Geelong, a blessing ceremony was held for the newly built chapel, which was created by the communion of this parish and their pastor, Rev. Luka Pranjić.

The ceremony was attended by Msgr Denis Hart, msgr.dr. Marko Semren, Auxiliary Bishop of Banja Luka and a representative of bishops from Croatia and Bosnia and Herzegovina who is currently on a pastoral visit to Australia, Rev. Gerald Keith – pastor in the church of the Holy Family, Rev. Dr. Tomislav Markić – Episcopal Vicar for the Laity and Director of the Archdiocesan Pastoral Institute in Zagreb and Director of Pastoral Care for Croats Abroad, Rev. Cyril Bozic – representative of all migrant priests in Melbourne. In addition to numerous Australian and Croatian priests and nuns, the Croatian General Assembly in Melbourne, Dubravko Belavić and the second order consul, Miroslav Miletić and his wife, the church choir and KUD Lado, numerous members of the Croatian community of Geelong, Ballarat and Melbourne were also present.

– (…) For all of you believers who gather in this center, we thank the Father, Bishop Denis for the generosity of participating in this great celebration and all our priests who work in Australia together with you, for thanking on behalf of all the bishops of Croatia and Bosnia and Herzegovina. worthy of their business. For a building to be solid, foundations are needed. Our personal experience was – if you rely on me, you will not survive, because our only survival is God, God is our support, our strength and guide, and therefore if God does not build a house, builders suffer in vain, if God does not protect the city , in vain the guard watches. (…) – are part of the address of the Rev. Marko Semren to the faithful of this parish under the Holy Mass in the church of St. Ante which was filled to the last seat.

After the solemn procession and blessing, a joint lunch was held at the Croatian Community Center. In addition to this great event for the Australian-Croatian community, the great 25th anniversary of the priesthood of Rev. Luka Pranjić was solemnly marked.

The Croatian Catholic Center was founded on November 12, 2014, and on February 28, 2015, the foundations were blessed and construction began. The results that have been achieved are the pride not only of this Croatian community in Geelong, but also of all Croats and Australians. The day of blessing the chapel, which will be a place and an oasis of peace and prayer, thus becomes a very important day that ends this project in which all members built themselves in communion, greater connection and love.

Thanks also go to the members of the Victorian-Croatian Cultural Charitable Center, who donated the land and hall to HKC, to all Croatian clubs and associations from Geelong and Australia who helped with the construction, and to all individuals, families and workers who contributed with their gifts and work. HKC Sv. Ante.

The first Sunday of the month at 3:00 PM