Attempts to establish a Croatian Catholic Centre in Western Australia began in 1961 with the arrival of Croatian priest Rev. Đure-Lovre Globan to Perth. Ordained in Rome, he was the only Salvatorian of the church in Croatia. He worked in Perth until 1964, when he departed for Tasmania due to his health and in search of a more suitable climate. With his departure, the community in Perth was once again left without a Croatian priest.

1971 was an important year for Croatian Catholics in Western Australia.

Renewal began with the arrival of the Rev. Većeslava Šupuka.

As a priest of the Split-Makarska Archdiocese – that is, a man of the south – he knew well the soul of the people from this region. As Croatians did not have their own church or their own priest, a heavy burden fell on the shoulders of this young priest. Good people looked to him, remained at his disposal, and offered their help. 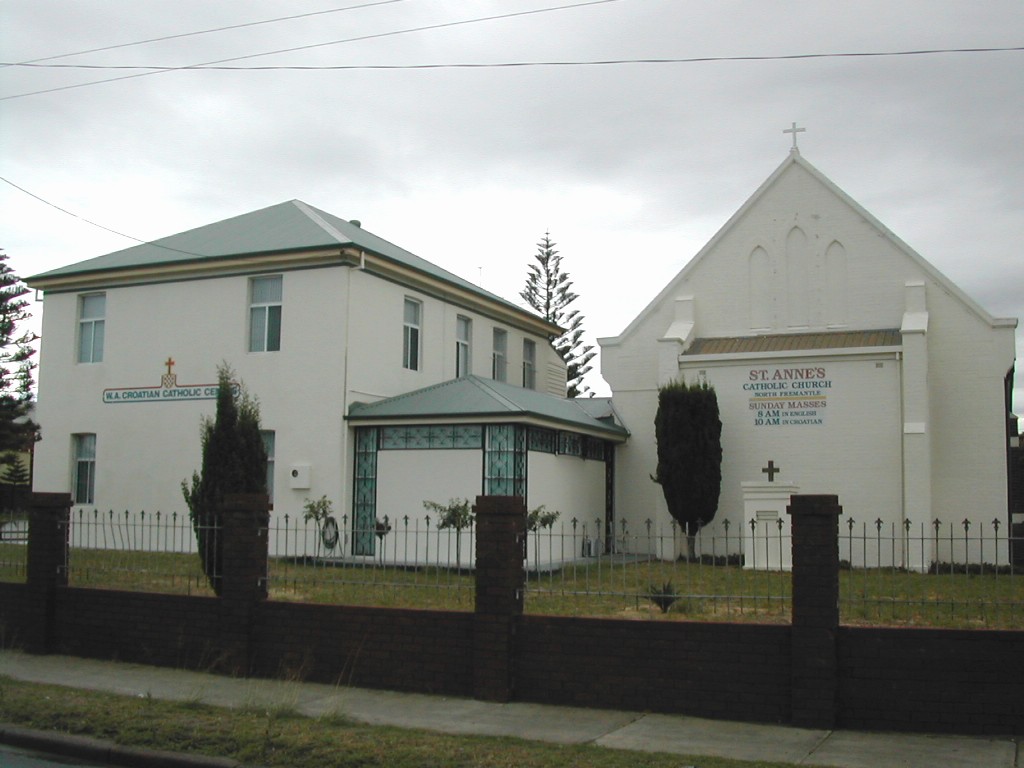 Several of them, along with their priest, went to the Archbishop of Perth, John-u Lancelotu Goodyu to ask for help. Archbishop Goody knew the difficulties facing Croatians very well, having learned Croatian as a young priest in the early 1930s during a two-year stay in Croatia. This visit was a complete success, with the Nadbiskup Goody

handing over the keys to St. Anne’s Church in North Fremantle for the pastoral needs of Catholic Croatians in the area, but on the condition that the church was cared for and supported. He also offered for purchase half of the land on which this church was located in order for them to be able to build a new place of gathering for the community.

News quickly spread that Croatians had acquired their own church, and the first Mass in Croatian was held on 20 November 1971 at the church of St. Anne, presided over by Rev. Većeslav Šupuk. This year (2021) we will mark the 50 years since the Croatians of Western Australia first entered through the arches of St. Anne’s Church in North Fremantle.

In 1974, Rev. Većeslav Šupuk  departed for Melbourne to assist Rev. Josip Kasić, and was replaced by Rev. Josip Vidaković, who on 17 October 1976 blessed the foundations of the future Croatian Social Centre, not far from St. Anne’s Church. On 6 August 1977, this Centre was blessed and officially opened by John Lancelot Goody.

At the end of 1978, Rev. Josip Vidaković decided it was time for him to return to Europe, but not before a new Croatian priest was found. Notices were posted at the official sites of all dioceses in Croatia that a new priest, willing to go to Australia, was wanted. Finally, after 6 months a young priest from the Archdiocese of Sarajevo (Vrhbosna) answered the call, and on 9 March 1979, Rev. Nikola Čabraja, arrived in Perth. Rev. Josip Vidaković stayed for a further three months to help Rev. Nikola settle in, and then departed for Germany.

Though Vlč. Čabraja had only planned to stay in Perth for three years and return to his archdiocese, God had other plans.

Still at the church of St. Anne, Vlč. Čabraja is now incardinated in this Archdiocese, and has been working here for 42 years as a Croatian priest for Western Australia. Someone else will one day write of the fruits of his work, but certainly in the meantime, the Croatians of Western Australia and their descendants are living witnesses to all of the good done by Croatian priests for their people under the Southern Cross.

If you want to listen to us at any time, download the free Croatian Catholic Radio APP application from your mobile phone.