The Croatian Catholic Center in Sunshine was founded at the same time as the HKC in Springvale. Of course, Rev. Josip Kasic reluctantly viewed the division of Melbourne and the establishment of these centers, which he later wrote publicly in his reports that it was not helpful to establish three independent Croatian Catholic centers in this Victorian metropolis.

To this, the writer who presented the Croatian Catholic Center in the Southern Cross replied that he did not know and did not understand what led him to make these claims and that it sounded a little strange in the ears of believers “as if someone objected to the bishop why he founded new parishes? The Reverend has real arguments that it was better: one center, one power, one for all. I think that the Croatian Catholic world sees what is better. The faithful built their center in Springvale of multimillion values … 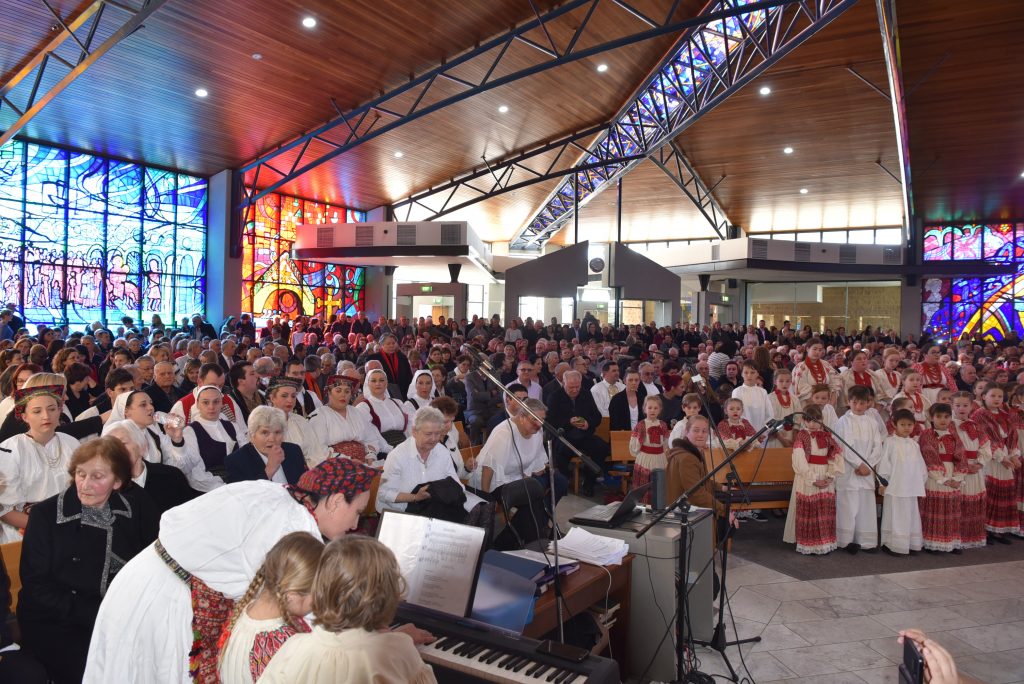 Croatian believers are approaching the construction of one of the largest Croatian Catholic centers in the world, which is named after the Croatian Catholic Center Sveti Leopold-Bogdan Mandić. This is the greatest proof and it seems to me that the only argument is that Croatian Catholics need more centers, more places of worship, where they are closer and more suitable to gather. Otherwise, they would not build something that is against them and that they do not need. “Start and look for a location to build the Center.

The first manager of the Center was appointed Rev. Anto Burić, priest of the Vrhbosna Archdiocese. It was not easy for him to act at that time after the establishment of a new area of ​​Croatian pastoral care on the west side of Melbourne. He resisted hoaxes and attacks, and organized new points of celebration of Holy Mass for Croatian Catholic believers in this area.

It acted in such a way as to stabilize the turbulent community and was accepted by all those who looked with good intentions on this new Croatian center. Although he often experienced attacks on his person, he still did not want to leave here before the expiration of five years of his activity, as he had promised Archbishop Franjo Kuharić when he left for Australia. Rev. Ante Burić is succeeded by Rev. Branko Barbić, also a priest of the Vrhbosna Archdiocese. Barbić came to Melbourne in May 1982, and in a short time of his activity he renewed his mission. He soon manages to buy a new house in Sunshine, after which he moves out of that house which was rented by Rev. Anto Burić also paid rent for it, and moved into his own premises of the Croatian Catholic Center. As a talented pastoralist, he is renovating the office and equipping it with modern technology.

After a little over a year, Branko Barbić left Sunshine and left the priestly ministry, settled his status and remained faithful to God and the Church and served his people in the best way he could. He is succeeded by the Vrhbosna priest Rev. Ivica Zlatunić, who arrived in Melbourne on December 24, 1982, and took over the administration of the Mission of the Blessed Virgin Mary, as the Center was called when it was founded, by the will of Vrhbosna Archbishop Dr. Marko Jozinović and President of the Bishops’ Conference Dr. Franjo Kuharić on February 1, 1983.

As on October 16 of that year, Pope John Paul II. Blessed Leopold Bogdan Mandić declared a saint, the Mission changed its name to the Croatian Catholic Center Sv. Leopold Bogdan Mandić, and thus the Croatian community in Sunshine every year celebrates this heavenly protector, but also celebrates the feast of the Assumption of the Blessed Virgin into heaven. On that occasion, they are organizing a large procession through this suburb, in which several thousand Catholic Croats from all over Melbourne are participating.

At the time of Rev. Ivica Zlatunić, and with the great efforts of Mr. Filip Filipović, Croats manage to get free land from the municipality of Sunshine, which according to the Southern Cross is a unique case that the municipality allocates land to one ethnic community without financial compensation. The land is about 16 acres in size (20 acres), and the Croats of western Melbourne are grateful to their community for this gift. After obtaining the land, preparations for the construction of the Center followed.

“First, it was necessary to prepare for the first part of our work, that is, plans for the house of priests, for the house of nuns and for the hall. The plans were made by Mr. Miro Heđeš. The plans were soon approved and the works began on February 10, 1985. The work is taken over by the Construction Committee headed by young but very ambitious engineers: Anto Dragović, Joško Topic and Filip Filipovic. Mandušić, then, Lukačević, Krste Lasić, Tičić, Gal, Radoš (Ćića), Fadljević, Štefančić, Morović, Drago Sabljak, Đek Raspudić and Vaće, Crnac, Tomin and thousands of other Croats who gave their share to this beautiful Center. The hall, measuring 40 x 50 meters, is not yet fully completed, but it serves us for holy masses, cultural, social and other meetings. “

This is how Rev. Fr. Ivica Zlatunić in 1989 in the South Cross, and notes that they began to raise funds for the construction of the church. As changes are taking place in the homeland, and the Homeland War is about to begin, the eyes and thoughts of Croatian emigrants are directed towards Croatia, to which they want and strive to provide every assistance in defense and struggle to preserve the newly acquired freedom. In such an atmosphere, the foundation for the new church was dug, which was blessed in 1983 by Cardinal Franjo Kuharić, who was then living in Australia. But as the defensive war in Croatia affected large areas, the construction of the church had to wait for some time for the help of the Croats to be directed towards the homeland.

But soon after the end of the war in the homeland, the Croats continued to build the church, although not with the pace and zeal as the hall was built, because people were emotionally and financially quite exhausted by the situation and events brought by the war, but still moved forward . The construction was led by Rev. Josip Vranješ who came to Sunshine on December 28, 1986. He spent some time with Rev. Ivica Zlatunić worked in Sunshine, and under their leadership the usual pastoral work took place.

The involvement of priests in Sunshine is also shown in other areas of their commitment to the Croatian community. In the area covered by the Croatian Catholic Center in Sunshine, there were three small Croatian schools where religious instruction was taught, while parish catechesis was performed at the Center in preparation for the sacraments of First Communion and Confirmation. There was also a youth society called the Croatian Catholic Youth of Victoria, and their goal was to spread Catholic culture in society and bear witness to life according to the Gospel.

In addition to the Center, there is the Croatian Women’s Social Charitable Society Sveti Leopold Bogdan Mandić, which takes care of the elderly, sick and infirm, and its members are engaged in the field of missionary activities of the Church, collecting goods and funds for Croatian missionaries in Africa. They organize and lead prayer groups as well.

The organization of pensioners who gather weekly at the Center for a joint lunch is also active, and it is also an opportunity for them to meet, talk and have fun. They often organize trips together and go to other parties, and experiencing togetherness they do not feel lonely and closed in their four walls.

SOURCES: “The hand of the Lord was upon them” about 50 years of pastoral care among the Croats of Melbourne, 2014. Pavo Jurišić