According to the memory of Croatian emigrants, the first pastor in Newcastle was Fr. Rock Romac (Oswald Toth). On Sundays he would come to serve St. Mass for Croats in Croatian at the Australian Parish Church in Charlstown. Later, due to the proximity of the hostel (shelter for foreigners), he gathered our faithful in the Church of the Immaculate Heart of Mary in Tighes Hill. 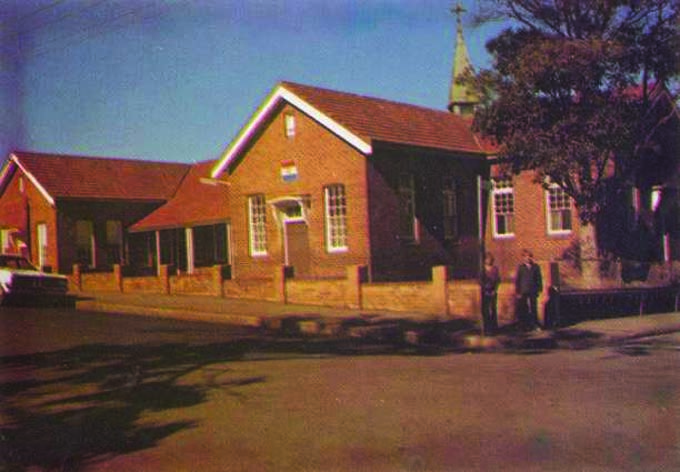 The first believers in this center were mostly emigrants and refugees from Croatia.

About l968. year began to come in and in large numbers to the Mayfield Hostel in Newcastle economic emigrants. At that time, because Fr. Rok Romac was very busy with work in other communities: in Sydney, Wollongong and even in Canberry, and in Newcastle at the end of his ministry only a very small number of Croats attended St. Mass on Sunday, he stopped coming to Newcastle regularly.

Then, l969. Before Easter, some Croats from Bosnia asked the nearest Australian pastor in the parish of Sv. John the Baptist, in West Mayfield, should, if possible, invite a Croatian priest from Sydney to come to Newcastle on Easter that year for Easter confession. The pastor was happy to do so. Moreover, he offered the Croatian priest time for confession and St. Mass in that Australian parish.

Fr. Rok Romac asked Fr. Eusebius Mack, who arrived in Sydney on December 21, l968. to the service of Croatian emigrants, to take care of them in Newcastle. He accepted it. So it was before Easter l969. year, the community of Croatian Catholics began St. Worship in the church of St. John in Mayfield. At that time, St. Mass at 6 o’clock every Saturday. Later, when opportunities permitted, Holy Mass was served every Sunday evening. At that time some emigrants got married, some baptized their children. There were almost no funerals at that time.

Older emigrants felt like one family. They held frequent parties, socialized at weddings and children’s baptisms, helped each other, lived as one family. New emigrants came for economic reasons. And they came from various parts of Croatia, mostly from Lika, Bosnia and Slavonia. The largest number of emigrants arrived between l968 and l973. years. What were they doing? Most of the men worked in the iron smelter in the so-called metallurgical giant. BHP. It was hard and arduous work: in the heat, in the dust, and in a somewhat dangerous environment. Some got involved in craft businesses. Some women worked in the kitchen of the hostel, some were taken by employers to clean rooms in the city. Workers were given the opportunity to attend English language school, mostly in the evenings and free of charge. Some gave up because of fatigue, some insisted on their greatest benefit. The salary was high in relation to what they earned at home. And that was a big temptation. Wanting to get out of the hostel as soon as possible and buy some houses, after the eight-hour shift, whenever they were offered, they worked without interruption and the second eight-hour shift. Those who worked in some parts of the factory for 10 days and then had four days off continued to work those four days off. Such work brought in a lot of money, the houses paid off quickly, the family got dressed, the food was plentiful, the children enjoyed the same standard in everything as the children of the natives in school and society. So when the mother got a job, the exhausted parents were nervous and did not have the time or energy to devote as much time as necessary to raising their children. Health also suffered. Some were relatively young suffering from cancer or other illnesses, and there were work-related injuries, so some died, and some the family even broke up. Good parents tried to send their children to the Croatian Catholic Center to learn the Croatian language. Others thought their children would not need it and did not care. Most Croatian Catholics included children in the Croatian dance group “Velebit” and later in such a group called “Cardinal Stepinac”. The children performed at festivals and youth performances in Australian society, conveying a message about Croatian culture. Religious instruction for First Communion and Confirmation was extremely rare because children and parents in Catholic schools, where they were given, were persuaded that children must receive these sacraments within the school they attended. When the children grew up and the influx of Croatian emigrants was significantly reduced, the folklore died down a bit. There were other troubles that bothered him. It is as numb as in many Croatian communities across Australia. Let us also mention that some Croatian families, with the help of their own, moved to Sydney, Melbourne and Canberra. Some younger families turned to their local churches and parishes for the sake of their children, attending Catholic schools. So is the number of believers in the Croatian chapel of St. Josip on Sunday St. Mass was getting smaller, and in 2007 it dropped to fifty, on average.

Croatian cardinals, archbishops and bishops visited the Croatian Catholic community in Newcastle when they visited Croatian Catholic communities in Australia. They served Sts. Masses and in preaching strongly encouraged members of the community not to forget the love of God and the Homeland. Here we will first mention Cardinal Franjo Kuharić and Card. Vinko Puljić. He was the first to visit this Croatian community on two occasions, accompanied by Msgr. Vladimir Stanković, manager of the Croatian foreign flock.

Over time, two new customs emerged: The annual pilgrimage to Mary, Queen of the Croats, to her (Croatian) church at Fig Tree in Wollongong on the Feast of the Assumption. Then, the pilgrimage celebration of St. Josip, patron saint of the chapel and Croatian faithful in Tighes Hill in Newcastle. Believers would arrive in a dozen small and large buses on Saturday before the feast of St. Josip from Croatian centers in Sydney and Wollongong. After the solemn service, which would be led by a guest priest, the faithful were served by the hospitality of the locals, first in the Croatian Cat. Center in Tighes Hill and then, due to better conditions and more space, in the Croatian club in Wickham.

Someone will ask: How many Croatian Catholics lived or now live in Newcastle. We will say: How when. In the 1970s, a lot of immigrants came to Newcastle. But they also went from here to other cities. Some died. Some are not known until they die. Around the 1970s, on the list of Croatian Catholics in Croatian. Floor. The center in Tighes Hill enrolled l06 Croatian families. Multiply by 4 and we get the number 400. If there were so many more unregistered, then the real number of Croatian Catholics would be around eight hundred. Some think that it is present here in Newcastle and the surrounding area around 2000. That number is not accurate.

By the way let us mention: In February l975. year, a Catholic parish in Tighes Hill was selling an old building, where there used to be a Catholic school. The priest and the faithful decided to buy it. The price was 34, ooo.oo dollars. A loan was taken from the Australian Franciscan Province. The property is Hrv. Franciscan Province of St. Cyril and Methodius, Zagreb, Croatia. It is for use by Croatian Catholics for religious and social activities. A chapel, dedicated to St. Joseph. The three classes are merged into the church hall. Prva sv. Mass was in the chapel of St. Joseph October 4, l975. years. The contract of sale was signed on October 20, l975. years.

The Croatian Catholic Center at l7 Bryant Street in Tighes Hill in Newcastle, consists of a chapel dedicated to St. Joseph, and halls with a kitchen. The church office is connected to it. Next to the chapel is the sacristy. Under the same roof, a modest priest’s apartment with kitchens and two rooms was added. The priest arrives from Sydney on Sunday evening. Sv. Mass is at 6 p.m. Before confession and prayer of the rosary. On Monday, Tuesday and Wednesday, St. Mass is served at 7 p.m. For the first two days, the priest visits the sick and performs the necessary tasks for the Center and the Community. He returns to Sydney on Wednesday. The regular priest Fr. Eusebius Peter Mak OFM who has been serving the community since Easter l939. until August 2007. From time to time he is replaced by Croatian pastors from Sydney.

Charitable activity hrv. The Catholic community in Newcastle consisted and consists today: l. Gatherings for the poor within the caritas of the Diocese of Maitland-Newcastle in Advent and Lent, gatherings for orphans in Croatia in B. and H. 2. once a year gathers for Shrines in the homeland of Jesus, for “Peter’s coin” and for the missions of the Catholic Church . 3. Gatherings to help victims of earthquakes and other disasters in Australia and beyond. 4. Sometimes help is sent to individuals who are seriously endangered, mostly due to illness. By the way: The Croatian Catholic Center subscribes to religious magazines from the Homeland.

Apart from religious activities, there were also social ones in this Croatian Catholic center: At first, parties were held with song, good cuisine, dancing and performances by a folklore group. Meetings of various groups were held in the church hall: Croatia Newcastle football administration, the elderly had a two-week gathering, bingo, lunch, family gatherings of small groups of believers, sometimes, very rarely, the usual snack after a funeral, birthday celebration or similar. The entire Center is supported by the faithful with their second alms at the Sunday of St. Mass.

Many are interested in how long this center will live. The answer is clear to everyone: As long as Croatian Catholics want to use it and as long as they can support it. May the Lord make it as long as possible!

The pastor of Croatian emigrants