During the year 1949/50. Croats arrived from various refugee camps in Austria and Italy in search of freedom and peace. In Australia, dreams have come true, so the first thing is the social organization of Croats in the Sydney area. These Croats settled in a narrow suburb called Surry Hills, where the Australian Catholic Church of Sts. Petra, where Croats had their first social functions and organized for the first public religious performance, the Eucharistic Congress. 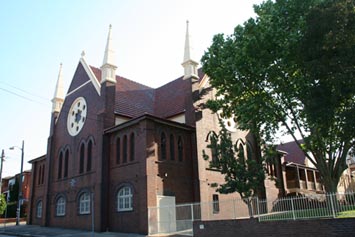 At that time we did not have a Croatian priest, but the Croats were led by Slovenian friars. The Australian Croatian Society, formed on February 4, 1951 in the Australian Catholic Church of the Holy Family in the suburbs of Maroubra Junction, felt the need for a Croatian priest. The first moves were made when the Society Committee liaised with the Catholic Office of Emigration, through Rev. Fr. Eris Tierneya. For a short time they stayed in Sydney, Rev. Mato Štetić, and then Rev. Ivan Mihalic.

However, it was only with the arrival of Fr. Roko Romac, who arrived from Bolivia, that the Croatian Catholic community was revived. His first name was Stjepan and his religious name was Osvald Toth Debeljak.

For a time, the Australian church in Surry Hills met all needs, and the Croatian Home was located near the church. Fr. Rok Romac led the action to buy a church, and with the help of a religious institution and the Croatian community, he bought a church in Summer Hill. At one time, at the exit from the church nave, there was a wooden plaque with the names of the first Croatian donors for the purchase of the church. This record has mysteriously disappeared. The Croats paid over ten thousand dollars.

Fr. Rok Romac was an extraordinary person. Thanks to him and his commitment, the solid foundations of the Croatian Catholic community in Sydney and beyond were laid. He lived in the Franciscan monastery in Waverly, but regularly visited the then Croatian Catholic community. His book, in fact a map of the city of Sydney in which he wrote the names and addresses of his faithful, was getting bigger every day. One day he dared and bought a special, bold book, in which all the believers were introduced, both those who come to church and those who are yearlings, as he used to say.

Now his “parish” stretched to Newcastle and further north, to the south all the way to the capital Canberra, and to the west to Bathurst. He traveled tirelessly and visited Croatian families, looking for a church for his Croatian Catholic community.

In the book “Franciscans among Croats in Sydney” it is written: For Sydney pastors, Fr. Roko Romac and Fr. … Many years of hard work “.

According to the newspaper “Hrvatski dom”, in June 1969 the owners of that church were the so-called congregationalists, and the price was $ 40,000. The church was registered in the ownership of the Croatian Franciscan Province of St. Cyril and Methodius based in Zagreb. The Croatian Catholic Church of St. Anthony in Summer Hill is dedicated to the honor of St. Antun Padovanski on December 15, 1968 by Sydney Cardinal Norman Gilroy. It was an indescribable ceremony and at the same time a public recognition to all those who participated in that action.

Next to the church was an old building where our Franciscans lived. The unhealthy smell of this old building was also felt in the churchyard. Finally, the building is demolished, and a suitable apartment is built not only for the local friars, but also for those who would later come to visit the Franciscans.

With the arrival of a new wave of Croatian emigrants, the Franciscans explored the possibility of expanding to new areas in the wide and vast west. But before that, a few words must be written about the other two actions. Namely, the Sydney Archdiocese offered Fr. Roko a building in Queen Street, Woollahra, in the elite part of Sydney. There is a home for singles, as well as for those who were new to Australia and did not have accommodation. The people called the building “Home of St. Clare”, but the real name was the Home of the Blessed Catherine Kosača. Later, the Croatian nuns were supposed to move into this building, but this did not happen, and the archdiocese took over the building.

The second move was to build a shrine in Tumbi Umbi near Gosford. The Home for Croatian Children of Cardinal Alojzije Stepinac was to be built there. Work began, bells were bought (which are now in front of the Church of the Croatian Great Covenant in Blacktown), but the action was never completed.

Fr. Rok Romac, ie the Croatian Catholic Center Sv. Antun in Summer Hill published the monthly “Dom”. In that newspaper, Fr. Rok built his flock, advised, criticized, scolded, but also praised. When the first Croatian school was opened in the premises of the Croatian Home in Buckingham Street, Surry Hills (1965), Fr. Rok blessed it and was of help to the teachers of the time.

Therefore, the Croatian Catholic Center in Summer Hill has played its historical role not only in the work and activities of the Catholic community, but also in the entire Croatian community. The successors of Fr. Roko Romac have preserved the successful operation of the Center until today, August 2008. The general world celebration called “World Youth Day” and the arrival of Pope Benedict XVI in Australia, and hundreds of pilgrims from all parts where Croats live, were the crown of the celebration where the Franciscans of Sydney, with the full help of Croats and Croatian patriotic institutions, greeted, honored, and proudly escorted the pilgrims to their native homes.

Therefore, the Croatian Catholic Center Sv. Antun in Summer Hill, was not only a participant in the ceremony, but through the organized Croatian Catholic Youth was an indelible chain of activities in this area.

Edited by Fabijan Lovoković (partly copied from a book in preparation entitled “Croatian Communities in Australia – Efforts and Achievements”).